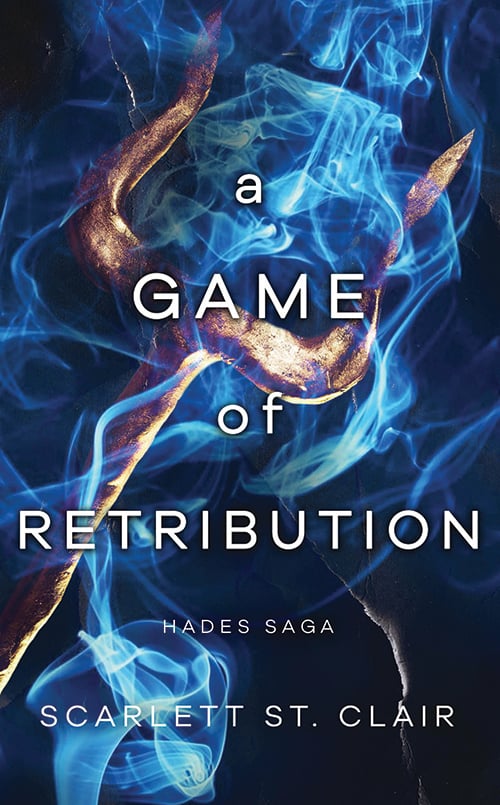 An Excerpt of Scarlett St. Clair’s A Game of Retribution

We have a mythic new delight for fans of Scarlett St. Clair, the bestselling author of the Hades & Persephone Saga, the Hades Saga, “King of Battle and Blood”, and “When Stars Come Out.”

Anyone who’s read St. Clair’s fan-favorite “A Touch of Darkness” knows that she’s obsessed with Greek Mythology, mysteries and intrigue of all sorts, and the afterlife. So, is it any surprise that in her newest book, “A Game of Retribution” ($26), published by Bloom Books, she approaches the mysteries of a new love affair from Hades, the God of the Dead’s, dark and brooding perspective? The entire book is told from Hades’s point of view, and he’s at odds with Hera, the Goddess of Women, who had approached him with a plan to overthrow Zeus. Hades doesn’t take sides and never bends the rules . . . not for his lover, Persephone, and not for the Queen of Olympus either. Hera, of course, is incensed, and as a punishment, she sentences Hades to perform a series of labors.

In this exclusive excerpt from “A Game of Retribution,” Hades is trying to find his footing in a new relationship with a young, tempestuous goddess who asserts he’s not being communicative enough. What else is a god to do but approach Aphrodite, the Goddess of Love, to help him figure out how to get back on Persephone’s good side? Get a taste of the drama for yourself by reading this exclusive look at “A Game of Retribution” before it comes out on May 31.

The following day, Hades found himself on the island of Lemnos, knocking on Aphrodite’s front door.

He hated what he was about to do, but Hecate had asked him over and over what he was going to do, and while Aphrodite never seemed to be able to handle her relationship with Hephaestus, she was still the Goddess of Love, and it was likely she could offer some insight.

Or at least, tell him what to avoid.

He peered through the glass door, looking for any sign of Aphrodite or Lucy, the animatronic maid Hephaestus had made who was far more lifelike than necessary in his opinion, but the hallway was empty.

He knocked again and sighed.

A loud yawn broke from behind him, and he turned to find Aphrodite stretching. She was dressed in peach, and her golden hair fell in waves down her back.

At seeing her, he suddenly felt very stupid and wanted to leave.

He started to leave, when Aphrodite’s presence flashed as she teleported closer to prevent him from going.

“Did you just apologize, Hades?” she asked.

He did not speak, and a smile curved her lips. “Something must be wrong,” she said. “Come.”

She led him down a walkway that ran parallel to her home and opened to a patio that overlooked the ocean. He had seen it in all forms throughout his visits to this island—deep blue and sea-green, golden and orange—but today the water churned beneath the bright sun, making it gleam like millions of diamonds. It almost hurt to look at it.

Aphrodite made her way to a lounge where it was clear she had been resting before Hades interrupted her. A book lay face-down on a table beside a large hat and some kind of pink drink.

“I would tell you to sit,” she said, “but I doubt you’ll be comfortable.”

He did not sit. He stood with his hands in his pockets, on the line where the shadow met the light, and stared off at the horizon, squinting against the bright day.

“I know you have not come all the way to Lemnos for the view,” Aphrodite said. “Tell me why you are here so we might both get back to our day.”

“As if your schedule was packed,” Hades countered.

“If you are going to come to beg for my help, you could at least respect my time.”

“Perhaps not,” she said. “But if you keep delaying, you will be on your knees before you leave my sight.”

Aphrodite’s eyes gleamed, amused, but as he began to tell her the story of Persephone’s loss, that warm glow in her eyes dimmed.

“I cannot even begin to decide how to make amends. She was right. I could have supported her more, prepared her for Lexa’s decision and Thanatos’s eventual reaping, but I didn’t. I treated her situation like every other mortal, thinking it was no different, but it was different because it was Persephone.”

He dragged his fingers through his hair, frustrated, and it fell from its tie around his face.

“Have you told her that you’re sorry?”

He met her gaze. “I haven’t seen her,” he answered. “But I want to do something.”

“Sometimes grand gestures are not as important as words, Hades,” Aphrodite replied.

Hades frowned. He couldn’t deny that he was disappointed in her response. “Odd that you would give such advice when you cannot even bring yourself to talk to Hephestus.”

Aphrodite’s mouth hardened and then her eyes flashed. It was the only warning he had before a hard hit sent him to his knees. He looked up to find that the Goddess of Love now stood inches from him, holding a gold rod that was taller than she was. It was the weapon she’d used to knock him off his feet and now she pointed the sharpened end at his face.

“You don’t have to like what I say,” Aphrodite said. “But you must respect me.”

She stared at him for a long moment, as if assessing whether or not he meant what he said, and after a moment, she nodded, righting her spear.

Slowly, Hades got to his feet, and after he took a breath, he explained, “I cannot imagine that she wants to hear from me.”

“I will not pretend to know her mind or answer for her,” Aphrodite said. “Plan something grand and beautiful, but remember that the only way forward is to ask her.”

Hades nodded and then after a moment, he met her gaze. “Any chance I can convince you to never bring this up again?”

“Never,” she replied with a wicked smile.