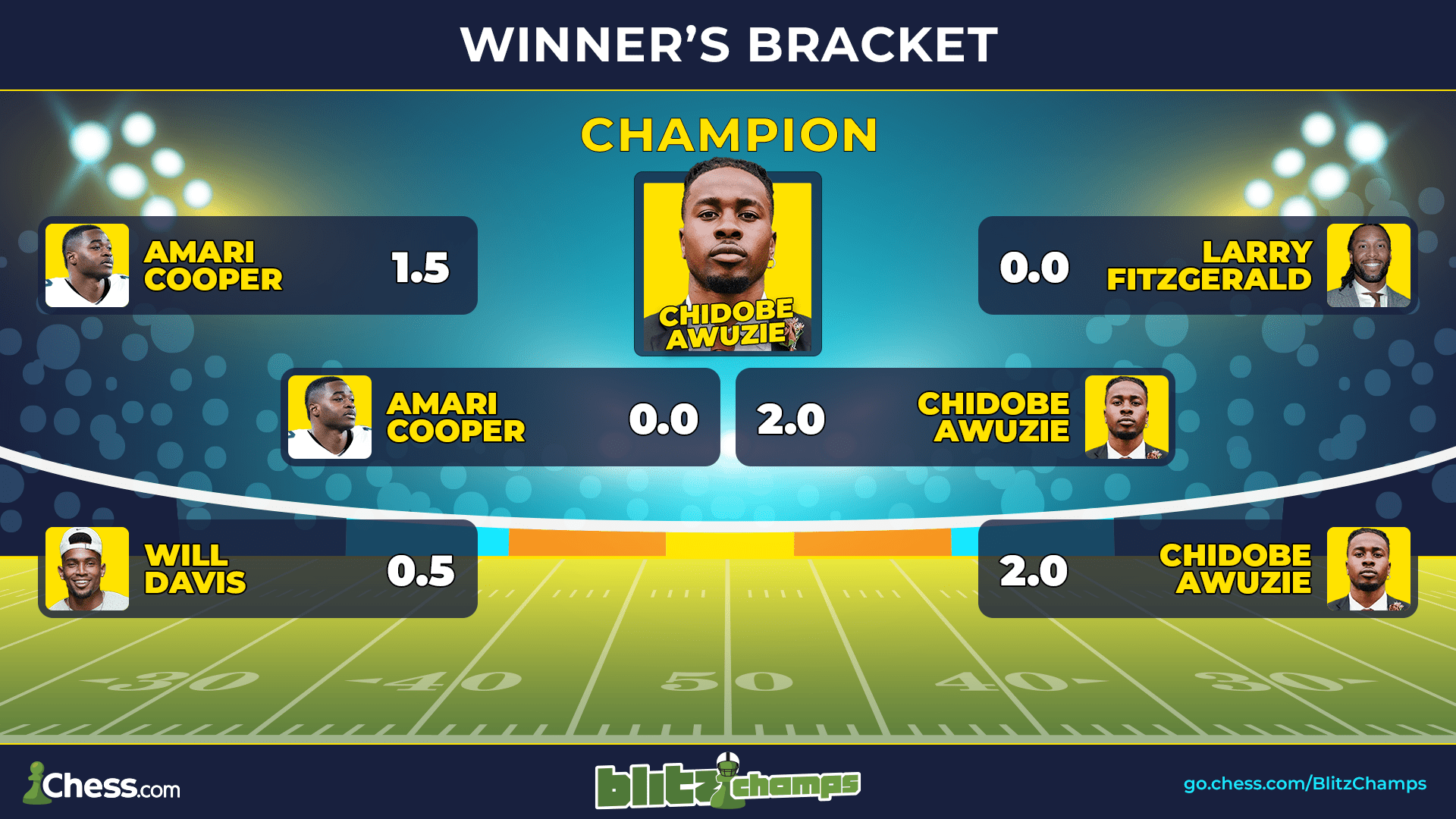 Chess.com’s BlitzChamps came to a close on Sunday when Cincinnati Bengals cornerback Chidobe Awuzie was crowned the inaugural winner of the event that looked to discover the best chess player in the NFL.

The final saw longtime locker room chess rivals, Awuzie and Cleveland Browns wide receiver Amari Cooper, face off in a rematch from Saturday’s group stage but this time it was Awuzie who exacted vengeance on his opponent to win $25,000 for his charity after a 2-0 victory.

Awuzie’s path to the final was impressive and he had to overcome the semifinalist and “hall-of-famer” in the making, Larry Fitzgerald, while Cooper became the first in the event to defeat last-minute ring-in, retired cornerback Will Davis, 1.5-0.5.

The consolation bracket match between Arik Armstead and Kayvon Thibodeaux, unfortunately, could not take place due to a personal matter that Armstead had to attend to. The players agreed to split the $22,500 consolation prize fund equally amongst their charities in spite of the match not taking place.

The semifinal match between Cooper and Davis began with an almighty scare for the best player from Saturday’s group stage. Davis, who surprised viewers yesterday with his resourcefulness, duped Cooper with a timely intermezzo that left him up a knight. Although he later had to give it back, the retired NFL star found himself up two pawns in an endgame and pushing for a win. Cooper kept his cool though and demonstrated resilience to find a perpetual check after 44 moves.

With everything to play for in the second game, Cooper employed his secret weapon: the Stafford Gambit. Recent winner of the I’M Not A GM Speed Chess Championship IM Eric Rosen would have been smiling from his throne as the wide receiver commenced a classic kingside flank attack. Commentator Rensch noted that if Cooper won then they’d “never hear the end of it” from Rosen and although we are yet to see a Tweet from the chess star, it is probably just a matter of time.

The opening was quite the rollercoaster ride and the evaluation bar yo-yoed between winning and losing but it was Cooper who eventually won a piece and tightened the vice, taking the match 1.5-0.5.

The second semifinal saw NFL legend Fitzgerald crash headfirst into an inspired Awuzie who was on a mission to make the final and gain retribution over his nemesis Cooper. The first game of the match was an 18-move masterclass from the cornerback who, ironically, pushed his opponent’s king into the back corner of the board. His execution of a back-rank checkmate was worthy of becoming a Chess.com daily puzzle.

Fitzgerald did his best to bounce back in the second game but could not match the accuracy with which Awuzie played in a seemingly equal queen, rook, and pawn ending. Clearly a confident player, Awuzie made a meme out of the final moments of the match, pre-moving his entire queen and rook checkmating sequence and kicking back to see it unfold.

The hotly anticipated rematch between Awuzie and Cooper finally arrived and after yesterday’s proceedings, this was nothing short of a grudge match. Both players burst out of the blocks, showing their intention to win at all costs. Cooper was able to build a promising position after castling queenside but went down like a lead balloon after a one-move blunder, leaving Awuzie in the box seat.

Taking a 1-0 lead into the final regulation game, the biggest danger for Awuzie was complacency, having already proven that he has nerves of steel. His experience on the big stage undoubtedly helped him show up and play his best chess in the final game. Cooper tried to throw the kitchen sink at his opponent but it was like playing against a brick wall.

Claiming a 2-0 victory in the final, Awuzie was announced as the inaugural BlitzChamp and dubbed by his rival as the best chess player in the NFL. At the moment when the result was confirmed, Awuzie could not help but provide one more entertaining moment, announcing “call me Thanos,” a pop culture reference that commentator Rensch would have enjoyed.

The tournament runner-up, Cooper, spoke candidly about his chess goals and particularly how he wants to “see people enjoy watching chess and being a part of the chess community” and mentioned that blitz and rapid tournaments are “a great way to do that.”

For winning the BlitzChamps event, Awuzie won $25,000 for his charity, Awuzie Kickstep Foundation, while Cooper secured $22,500 for his selected charity, The Barnyard. The remaining full prize fund and allocations are outlined below.

BlitzChamps was an event where NFL stars competed in a series of rapid games to prove who has the best moves! The event was held on July 9 and 10. Players competed for a piece of the $100,000 prize fund for their favorite charity, not to mention the bragging rights.

All eyes now turn to the Chess.com Global Championship play-in phase which commences July 11th, starting at 5 a.m. PT / 14:00 CEST. With a record-breaking $1,000,000 prize fund up for grabs this is an event not to be missed.