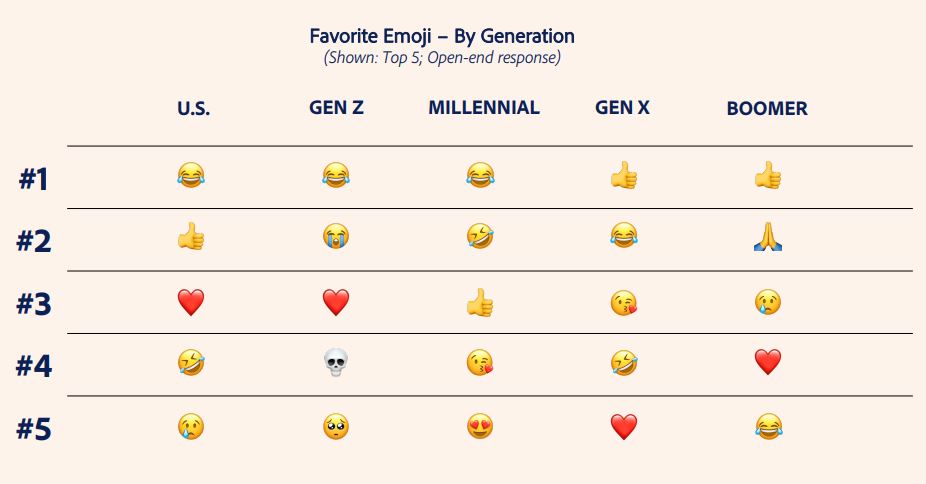 [The Internet you know and love is on life support after an awful NetChoice v. Paxton Fifth Circuit opinion and the enactment of two California laws, AB 2273 and AB 587. I’ve written so much about those bills that I don’t have anything new to add today, and a blog post on NetChoice v. Paxton is coming soon. For today, I’m going to stay in my alternative reality where we still have the ability to talk to each other online in the future. The realism of my alternative universe will depend on what the courts ultimately say.]

Adobe published a survey, the “Future of Creativity: 2022 U.S. Emoji Trend Report.” The survey focuses on “frequent emoji users across the United State,” so it does not represent all Internet users or the population generally. Still, let’s see what power emoji users had to say.

Is there any real doubt that emojis serve important pro-social functions?

I’ll separately break out the emoji usage in the workplace, because this comes up often in legal circles:

While this survey population is not representative of the general population, these statistics demonstrate the implicit bias in anyone who argues against using emojis in business communications. THEY may not value emojis, but other people value them greatly. Thus, a ban basically cuts off a key means of expression for GenZ (and others), so it sends the unmistakable signal that the younger workers aren’t valued and perhaps will be punished for the ways young people talk with each other. OK, boomer.

Some other interesting stuff from the survey:

[I’m a little surprised by this, frankly. A well-timed/placed poop emoji is awesome.] 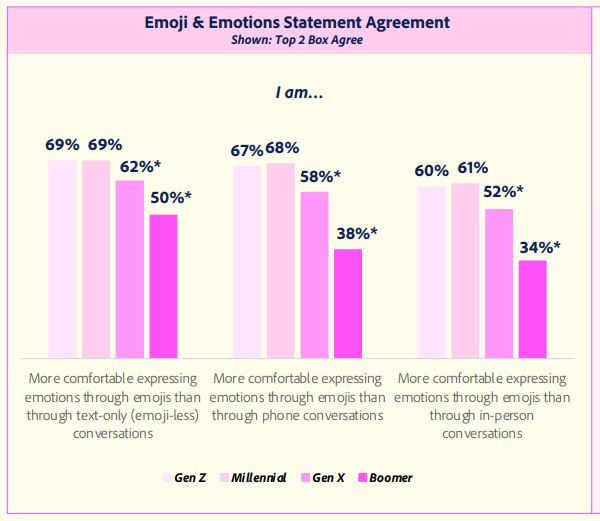 [I have no idea where this is coming from, but it suggests that the law of contracts may get emojified in a big way!]