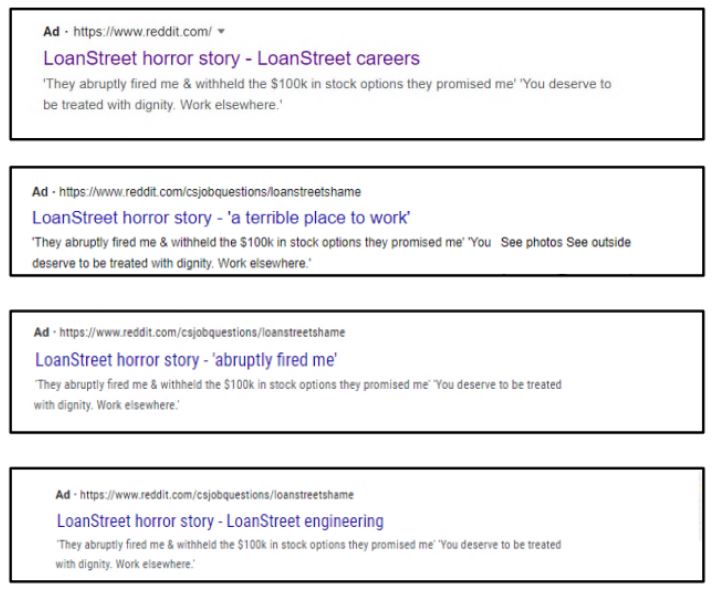 Troia was a LoanStreet employee. He was allegedly fired for cause. Troia posted disparaging comments about LoanStreet at Glassdoor.com, Reddit.com, and Teamblind.com. He then worked to boost the posts’ visibility, including:

Much of the opinion addresses whether Troia’s posts were defamatory. The court largely sides with LoanStreet. For example, the court says: “Defendant deliberately and strategically utilized the Internet to spread statements capable of defamatory meaning. Defendant cannot now hide under the cloak of cyberspace to escape liability.”

I’ll focus on the false designation of origin claim regarding Troia’s keyword ads. The court displays some of the ads:

Troia claimed that he did not use the LoanStreet trademark in commerce. However, the court points out that he referenced the trademark in keyword ads (the court cites Google’s upper-left labeling to reinforce the point), which normally would be a use in commerce. In support of that conclusion, the court makes this murky statement: “courts in this Circuit have repeatedly held that a plaintiff may state a claim under the Lanham Act where the defendant (1) interfered with the plaintiff’s ability to offer its own commercial services, and/or (2) used the Internet.” The “or” part of that statement is clearly wrong. Just referencing a trademark on the Internet does not support a trademark claim, full stop. The “interference” part is also wrong, or should be. The court cites a mix of competitor lawsuits (which this is clearly not) and some antiquated 20+ year old griper precedent that are no longer credible law since the more modern approaches to gripers. Based on this stew of bad precedent, the court says LoanStreet cleared the “use in commerce” threshold when:

Plaintiffs allege that defendant’s purchase of the LoanStreet trademark as a Google keyword was “willful with the deliberate intent to . . . divert potential sales of LoanStreet services, as well as potential new hires, away from LoanStreet.”

FFS. That’s what gripers do. This interpretation of “use in commerce” has obvious First Amendment tensions.

Also, there should not be a “use in commerce” when the advertiser (here, Troia) doesn’t actually offer any goods or services in the marketplace. That should have ended the case. Instead, the court’s hacking of precedent brought to mind one of my all-time least-favorite trademark cases (it still annoys me 15+ years later!), the SMJ case. In that case, a restaurant’s critics handled out pamphlets in front of the restaurant that referenced the trademark on the front. The court there found use in commerce because “Plaintiffs’ marks are clearly displayed on the front of the pamphlets distributed by defendants, and the distribution of those educational leaflets is a service under the Lanham Act.” This definition of a service is an obvious tautology, and it’s also obviously in tension with the First Amendment. The LoanStreet court didn’t even go that far with the “educational leaflet service” trick; it simply said that gripers ads that could damage a business’ reputation constitute a use in commerce, even when there’s zero commercial activity. Terrible.

Likelihood of Consumer Confusion. Even if the court hacks the use in commerce standard, there’s no way the court could find a likelihood of consumer confusion about the source of products/services in the marketplace, right? Troia wasn’t offering any services at all, but also, note the ad copy–the headline says “horror story” and the text says “They abruptly fired me,” which were pretty good tipoffs to consumers of what they should expect at the link.

The court “cleverly” responds by saying that Troia “has attempted to divert the very users seeking out the real LoanStreet,” but what does “diversion” mean in this context? Troia diverted them to….where? His griping posts? To marketplace alternatives that they independently discover and vet? None of this is diversion; it’s consumer education. And how can consumers be “diverted” with the ad copy accurately previewed what consumers could expect to get at the link terminus? As the court says later, “it seems unlikely that an Internet user who reads defendant’s advertisements would believe that they belong to or are endorsed by plaintiffs.” So why wasn’t that dispositive?

So by the time the court says “the parties are vying for users in the same ‘market,’” you know that the judge has lost the thread. How can Troia vie for a “market” when the court already said he “is not offering a good or service”???

As for bad faith, the court implies that a griper always acts in bad faith by griping. These allegations sufficed to show Troia’s alleged bad faith: “Upon his termination, defendant vowed that he would “be doing [his] best to warn all potential future employees to avoid LoanStreet,” and by his own admission, defendant sought to “amplif[y]” his negative comments and warn “as many people . . . as possible” about plaintiffs’ purported misconduct.”

Following mid-2000s cases like Lamparello and Lucas Nursery, we rarely see such unforgiving anti-griper opinions that twist the Lanham Act to cover circumstances it was never designed to cover. This opinion has a major First Amendment problem that I hope this court, or an appellate court, fixes ASAP.

Penn Engineering asserts trademark rights in the term “PEM.” The court grants summary judgment to the advertiser on the keyword triggering claim, which involved this screenshot: 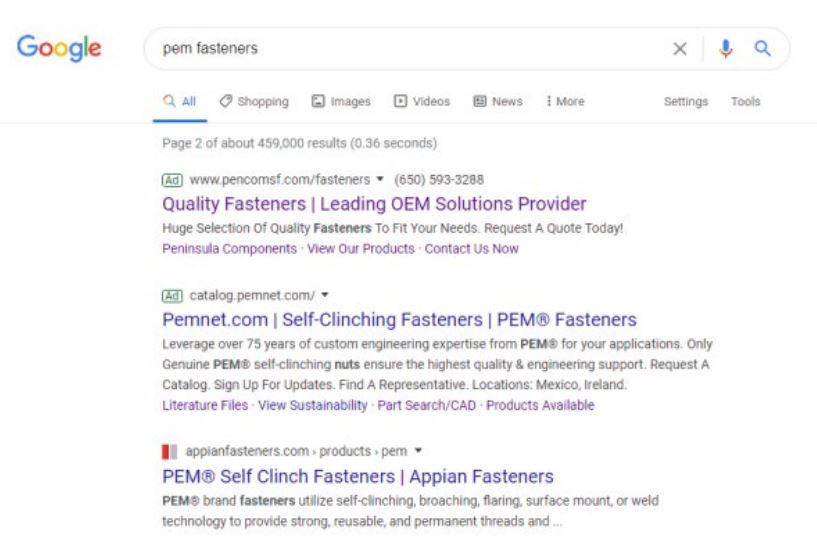 The court says: “there is no dispute that the links are clearly labeled as belonging to Peninsula and there is no likelihood of confusion where the use of trademarks as trigger words is hidden from the consumer.”

The advertiser also included the PEM trademark in the ad copy: 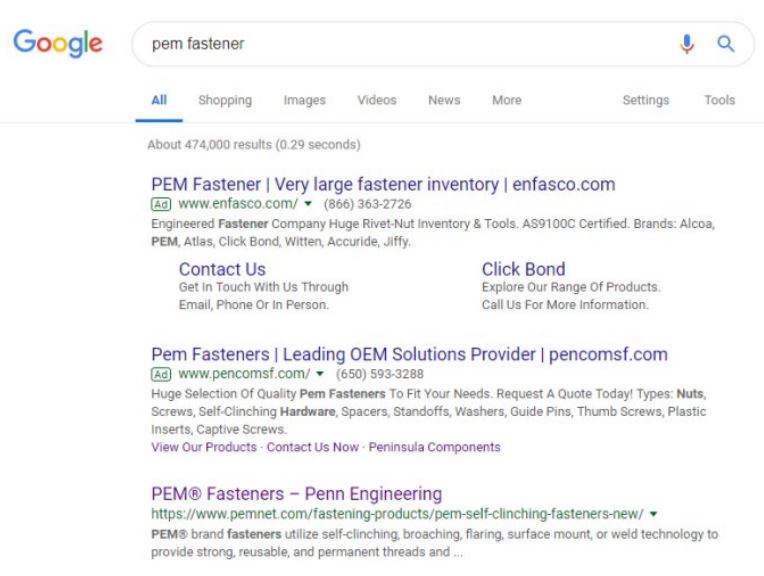 The court sends the ad copy issue to trial:

Unlike the hidden use of the PEM trademark to trigger ads, a reasonable jury could conclude that there is a likelihood of initial interest confusion from the visible use of “PEM” in Peninsula’s advertisements because the advertisement is not clearly labeled. On the other hand, a reasonable jury weighing the Lapp factors could instead conclude that that there was no intent to confuse (rather, a vendor mistake) and that the average Internet user’s ability to understand the difference between ads and direct search results diminishes the likelihood of confusion in these limited instances….neither party has addressed whether a de minimis amount of initial interest confusion subsisting over a long period of time would support a trademark infringement claim

This reminded me of the Network Automation case, which also involved B2B products where the consumer evaluation of the ad depended on whether or not the consumer already knew the taxonomy of competitors. If so, the above screenshot is clear to consumers. If not, then consumer confusion is more possible, but the “initial interest confusion” doctrine does nothing to advance that analysis.

FWIW, this is an example of an overlitigated case. The judge summarizes: “at the close of discovery, the parties have filed six dueling partial motions for summary judgment. These six motions—without even counting the opposition, reply, and sur-reply filings—involve over 13,000 pages of briefing and attachments. From this voluminous record, the parties ask the Court to determine that there are no disputes of material fact.” Can you hear a tone of resignation in the judge’s voice?